Long before I was anything as a journalist, I was everything…

I was a sportswriter.

Imagine exceeding a dream you never had?

Growing up in one of a million, pressed-together Jersey suburbs, sports were my life and reading about ’em a close second.

Like many families we got two newspapers delivered to our house — one in the morning, The NY Times, and another in the evening, The Courier News. And here’s something I am threatening to write about later: The guy who edited The Courier News at that time? Well, he would go on to be my boss about 30 years later when I was a managing editor at another paper in another state in another century.

Go ahead, you try to predict how everything turns out in life.

Each morning I’d tear into my cereal and that day’s edition of The Times to get all the ball scores and the gouge on what went down the night before. There were actually people who seemed to have jobs writing sports stories. Are you kidding me? I always thought that just had to be too good to be true.

After a severe growth spurt and a three-year stint in the Navy, I got married to a very wise, very good-looking gal who pressed me to go for a job at the weekly paper. They were advertising for a sportswriter. Me? ME??

So I slapped some clips together from a college paper I quit, and went right down there and talked myself into that job. Actually, I spilled my guts all over the floor.

It was (and is) about being the dude in town who let you know what was going on because you couldn’t be there.

It was (and is) about asking the questions readers wanted to ask but couldn’t.

It was (and is) about making sure those questions got answered because readers, above all, deserved answers.

I worked that job for a few years while also busting my then-skinny ass as a landscaper to make some real money. I learned AP style, how to write on deadline and not to take it personally when my editor said stuff like, “How am I supposed to edit this horseshit?”

Thing is, the New York/New Jersey area was a tough place to break in. It was the destination for journalists, not the start.

So after some contemplation, and armed with the realization that we were as footloose and fancy free as anybody in the world, we gassed up our beat-up Buick and pointed it at SW Florida. I had my eye on a longshot job in Naples asking for a sportswriter.

The dream I never had was about to come true… 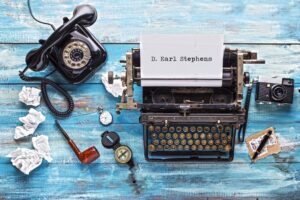